No announcement available or all announcement expired.
Two Narratives of Creation by Rabbi Lord Jonathan Sacks 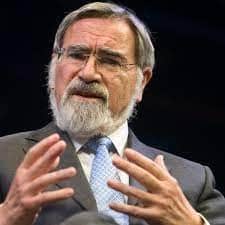 The Torah describes two acts of creation: G-d’s creation of the universe, and the Israelites’ creation of the mikdash or mishkan, the sanctuary that travelled with them in the desert, the prototype of the Temple in Jerusalem.

The connection between them is not incidental. As a number of commentators have noted, the Torah invokes a series of verbal parallels between them. The effect is unmistakable. The latter mirrors the former. As G-d made the universe so He instructed the Israelites to make the mishkan. It is their first great constructive and collaborative act after crossing the Red Sea, leaving the domain of Egypt and entering their new domain as the people of G-d. Just as the universe began with an act of creation, so Jewish history (the history of a redeemed people) begins with an act of creation:

The key words – make, see, complete, bless, sanctify, work, behold – are the same in both narratives. The effect is to suggest that making the mishkan was, for the Israelites, what creating the universe was for G-d.

Yet the disparity is extraordinary. The creation of the universe takes a mere 34 verses (Genesis ch. 1 together with the first three verses of ch.2). The making of the mishkan takes hundreds of verses (Terumah, Tetzaveh, part of Ki Tissa, Vayakhel and Pekudei) – considerably more than ten times as long. Why? The universe is vast. The sanctuary was small, a modest construction of poles and drapes that could be dismantled and carried from place to place as the Israelites journeyed through the wilderness. Given that the length of any passage in the Torah is a guide to the significance it attaches to an episode or law, why devote so much time and space to the Tabernacle? The answer is profound. The Torah is not man’s book of G-d. It is God’s book of mankind. It is not difficult for an infinite, omnipotent creator to make a home for humanity. What is difficult is for human beings, in their finitude and vulnerability, to make a home for G-d. Yet that is the purpose, not only of the mishkan in particular but of the Torah as a whole. A midrash puts it graphically:

Then came Moses and brought the Divine presence down to earth. When? When the Tabernacle was erected. Then the Holy One, blessed be he, said: “I have come into my garden, my sister, my bride” – I have come to that which I desired . This is the meaning of “It came to pass on the day that Moses finished erecting the Tabernacle” – the source of Rabbi Shimon bar Yochai’s statement that “Wherever it says ‘and it came to pass’ it refers to something that existed in the past, and was then interrupted, and then returned to its original situation.” (Tanchumah , Naso, 24)

The Tabernacle, small and fragile though it was, was an event of cosmic significance. It brought the Divine presence down from heaven to earth. How, though, are we to understand this idea? It is contained in one of the key words of the Torah, namely kadosh, “holy”.

As the Jewish mystics noted, creation involves an act of self-limitation on the part of the Creator. The word olam, “universe” is directly related to the word ne-elam, meaning “hidden”. For there to be the possibility of a being with freewill, choice and moral responsibility, God cannot be a ubiquitously tangible presence. When the Israelites heard the voice of G-d at Sinai, they said to Moses, “Speak to us yourself and we will listen. But do not have G-d speak to us or we will die” (Ex. 20: 19). The direct, unmediated presence of God is overwhelming.

The infinite crowds out the finite. G-d is like a parent; and unless a parent lets go, the child will never learn to walk. Letting go means that the child will stumble and fall, but not for ever. Eventually it will learn to walk. So it is with other forms of learning-by-doing. At various stages a parent must progressively withdraw to leave space for the child to grow. So too God must withdraw if humanity – made in His image – is eventually to become His “partner in the work of creation”. Creation is an act of Divine self-limitation.

This, however, creates a paradox. If G-d is perceptible everywhere, there is no room for mankind. But if G-d is perceptible nowhere, how can humanity know Him, reach Him, or understand what He wants from us? The answer – already hinted at in the account of creation itself – is that G-d reserves, in several dimensions, a domain that is peculiarly His. The first is in time – the seventh day (and eventually, the seventh month, the seventh year, and the jubilee at the end of the seventh cycle of sabbatical years). The second was among the nations after their division into multiple languages and civilizations – the covenantal people, the children of Israel. The third was in space – the Tabernacle. Each of these is holy, meaning, a point at which the Divine presence emerges from hiddenness to exposure, from concealment to revelation. As Shabbat is to time, so the Tabernacle was to space: kadosh, holy, set apart, God’s domain. The holy is the metaphysical arena where heaven and earth meet.

That meeting has specific parameters. It is where G-d rules, not mankind. Therefore, it is associated with the renunciation of the autonomous human will. There is no room for private initiative on the part of mankind. That is why later, Nadav and Avihu die because they bring a fire-offering that “was not commanded.” Just as chol (“the secular”) is where G-d practises self-limitation to create space for mankind, so kodesh is where human beings engage in self-limitation to create space for G-d.

That is why the creation of the Tabernacle by the Israelites is the counterpart of the creation of the universe by G-d. Both were acts of self-renunciation whereby the one made space for the other. The elaborate detail with which the Torah describes the making of the mishkan is to show that none of it was done at the initiative of Moses, or Betzalel, or the Israelites themselves. Hence the lack of parallelism at one crucial point. Whereas after the creation of the universe we read, “And God saw all that He had made, and behold it was very good” (1: 31), after the making of the mishkan we read, “Moses saw all the skilled work and behold they had done it; as G-d commanded it, they had done it.” When it comes to the holy, “as G-d commanded it” is the human equivalent of the Divine “it was very good”. Chol is the space G-d makes for man. Kodesh is the space we make for G-d.