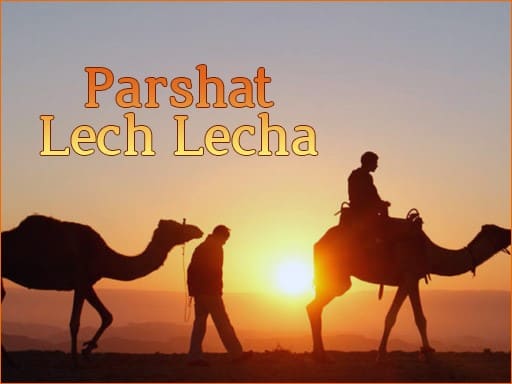 The Almighty commands Avram (later renamed Avraham) to leave Haran and go to the “place that I will show you” (which turned out to be the land of Canaan — later renamed the Land of Israel).  The Almighty then gives Avram an eternal message to the Jewish people and to the nations of the world, “I will bless those who bless you and he who curses you I will curse.”  Finding a famine, Avram travels to Egypt (once renamed to be part of the United Arab Republic) asking Sarai (later renamed Sarah), to say she is his sister so they won’t kill him to marry her (the Egyptians were particular not to commit adultery … so they would kill the husband instead).

Pharaoh evicts Avram from Egypt after attempting to take Sarai for a wife. They settle in Hebron (also known as Kiryat Arba) and his nephew Lot settles in Sodom.  Avram rescues Lot — who was taken captive — in the Battle of the Four Kings against the Five Kings.

Entering into a covenant with the Almighty (all covenants with the Almighty are eternal, never to be abrogated or replaced by new covenants), Avram is told that his descendants will be enslaved for 400 years and that his descendants (via Isaac, “… through Isaac will offspring be considered yours.” Gen. 21:8) will be given the land “from the river of Egypt unto the great river, the river Euphrates.”

Sarai, childless, gives her handmaid Hagar to Avram for a wife so that he will have children.  Ishmael (the alter zedeh — the grandfather — of our Arab cousins) is born.  The covenant of brit mila, religious circumcision, is made (read 17:3-8), G-d changes their names to Avraham and Sarah and tells them that Sarah will give birth to Yitzhak (Isaac).  Avraham circumcises all the males of his household.