No announcement available or all announcement expired.
The seder plate is the focal point of the Passover seder. Discover its ingredients and symbolism. 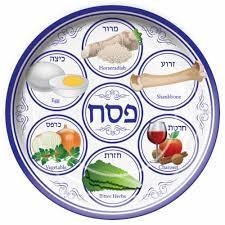 The seder plate is the focal point of the Passover seder. Discover its ingredients and symbolism.

The seder plate is the focal point of the Passover (Pesach) seder. It is a special plate containing symbolic foods eaten or displayed at the Passover Seder.

Karpas is a vegetable (other than bitter herbs) such as celery, parsley, or boiled potato. It must be a vegetable on which we make the blessing, Borei Pri Ha’Adamah. Passover is the Spring festival where we celebrate the birth of our nation ― and these vegetables are a symbol of rebirth and rejuvenation.

These are the bitter herbs which symbolize the lot of the Hebrew slaves whose lives were embittered by the hard labour. Many people use horseradish for Marror and Romaine lettuce for Chazeret.

Charoset reminds us of the hard Jewish labour performed with bricks and mortar. Charoset is a pasty mixture of nuts, dates, apples, wine and cinnamon. The Talmud says this serves as an “antiseptic” to dilute the harsh effects of the Marror.

During the times of the Temple in Jerusalem, the Korbon Pesach (Pascal Lamb) was brought to the Temple on the eve of Passover. It was roasted, and was the last thing eaten at the Seder meal. To commemorate this offering, we place a roasted chicken bone with a little meat remaining.

In Temple times, every Jew was “registered” to eat the Korbon Pesach with his particular group. The Talmud says that the bigger the group, the better. This is a source for having large Seder gatherings!

A second offering, called the Chagigah, was brought to the Temple and eaten as the main course of the Seder meal. Today, instead of a second piece of meat, we use a roasted egg ― which is traditionally a symbol of mourning ― to remind us of the destruction of the Temple. The Talmud points out that every year, the first day of Passover falls out on the same day of the week as Tisha B’Av, the day of mourning for the destruction of the Temple.