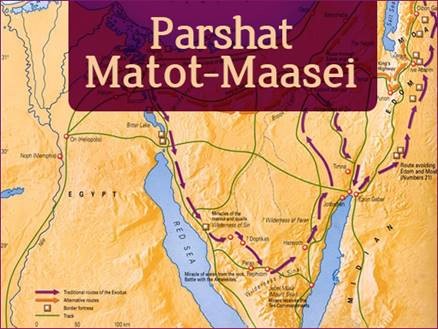 Parshat Matos and Masei a Summary

Matos includes the laws of making and annulling vows, the surprise attack on Midian (the ’67 War wasn’t the Jewish people’s first surprise attack!) in retribution for the devastation the Midianites wreaked upon the Jewish people, the purification after the war of people and vessels, dedicating a portion of the spoils to the communal good (perhaps the first Federation campaign), the request of the tribes of Reuben and Gad for their portion of land to be east of the Jordan river (yes, Trans-Jordan/Jordan is also part of the Biblical land of Israel). Moshe objects to the request because he thinks the tribes will not take part in the conquering of the land of Israel; the tribes clarify that they will be the advance troops in the attack and thus receive permission.

Masei includes the complete list of journeys in the desert (the name of each stop hints at a deeper meaning, a lesson learned there). G-d commands to drive out the land’s inhabitants, to destroy their idols and to divide the land by a lottery system. G-d establishes the borders of the Land of Israel. New leadership is appointed, cities of the Levites and Cities of Refuge (where an accidental murderer may seek asylum) are designated. Lastly, the laws are set forth regarding accidental and wilful murder as well as inheritance laws only for that generation regarding property of a couple where each came from a different tribe.