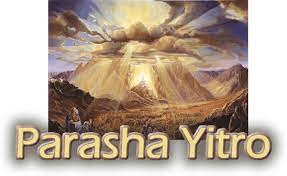 This is the Torah portion containing the giving of the Ten Commandments.
Did you know that there are differences in the Ten Commandments as
stated here (_Exodus [1]_ 20:1-14 [1]) and restated later in
_Deuteronomy [2]_ 5:6-18 [2]? (Suggestion: have your children find the
differences as a game at the Shabbat table during dinner).

Moshes’ father-in-law, Jethro (Yitro or Yisro in the Hebrew), joins the
Jewish people in the desert, advises Moses on the best way to serve and
judge the people — by appointing a hierarchy of intermediaries — and
then returns home to Midian. The Ten Commandments are given, the first
two were heard directly from G-d by every Jew and then the people begged
Moses to be their intermediary for the remaining eight because
the experience was too intense.

The portion concludes with the Almighty telling Moses to instruct the
Jewish people not to make any images of G-d. They were then commanded to
make an earthen altar, and eventually to make a stone altar, but without
the use of a sword or metal tool.