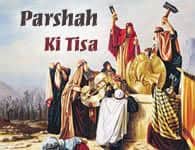 The Torah portion includes: instructions for taking a census (by each person donating a half shekel); instructions to make the Washstand, Anointing Oil, and The Incense for the Mishkan (the Portable Sanctuary also known as the Tabernacle); appointing Bezalel and Oholiab to head up the architects and craftsmen for the Mishkan; a special commandment forbidding the building of the Mishkan on Shabbat (people might have thought that they would be allowed to violate the Shabbat to do a mitzvah…)The Torah portion continues with the infamous story of the Golden Calf. The people wrongly calculated that Moses was late in coming down from Mt. Sinai and the people were already seeking a replacement for him by making the Golden Calf (there is a big lesson in patience for us here). Moses sees them dancing around the calf and in anger breaks the Two Tablets; he then punishes the 3,000 wrongdoers (less than .1% of the 3 million people), pleads to God not to wipe out the people, requests to see the Divine Glory, and receives the second set of Tablets of the Ten Commandments.