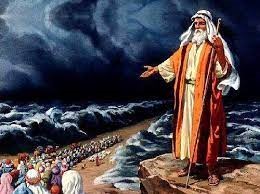 Sefer Devarim recounts Moshe Rabeinu “final master class” in the last weeks of his life. As such, he found it appropriate to begin his last message by rebuking the people for the sins they committed during their 40 years of wandering through the desert.

However, he did not admonish them directly, rather using subtle reminders, thereby sparing them further humiliation. In order to do so, he just mentioned the names of places alluding to the sins. When the Torah rights that “Moshe spoke these words between Paran, Tofel, Lavan, Chatzeiros, and Di Zahav”, each place refers to a different sin committed by the Jews.

“Di Zahav”, which may be translated as “abundant gold”, alludes to the sin of the Golden Calf. As Rashi explains, the Jews had so much gold with them that they ended up using it for the wrong purpose (1:1).

But were the Jews really to blame? Wasn’t it God Almighty who had just given them all that gold? Indeed that was Moshe’s defence of the Jewish people. In fact, the Gemara states that this is one of the few cases were Moshe spoke impertinently. He said: “Master of the Universe, it is because of the gold and silver that you lavished upon Israel during the Exodus, until they had to say ‘enough’ (dai), that they made the Golden Calf!” (Shabbat 32a).

The Sages further developed this idea. Rabbi Yohanan compared it to a father who bathed his son, anointed him with oil, fed him and gave him drink, and hung a purse of money around his neck. He then brought his son to the entrance of a brothel. “What could the son do to avoid sinning?”, asks the Gemara.

Even though the idea seems quite clear, the Gemara brings several psukim to prove the veracity of Moshe’s argument: “When they were fed and became full they were sated, and their hearts were lifted and they have forgotten Me” (Hoshea 13:6), “And your heart is lifted and you forget the Lord” (Devarim 8:14), “And they will have eaten and been sated and fattened, and they will turn to other gods” (Devarim 31:20), “And Jeshurun grew fat and kicked” (Devarim 32:15). Moshe’s argument seems well supported, to the point where the Gemara concludes that Hakadosh Baruch Hu ultimately conceded to Moshe, as it is written: “And I gave them an abundance of silver and gold, which they used for the Ba’al” (Hoshea 2:10).But if so, why were they even being admonished? Didn’t Moshe exhaustively prove their innocence? Why even remind them of their unintended wrongdoings?

Working as a therapist, I frequently faced the following dilemma. People have a tendency to perpetuate certain negative behaviours. Let’s imagine, for example, a violent mother. After many sessions she finally reaches the conclusion that much of her violence was learnt from her own mother, who was equally violent to her as a child. Now we have a problem: the younger mother has just understood why she behaves the way she does. So, in a sense, she feels less guilty for it. However, this is of no use if she does not take that understanding and turn it into action. A person must realize that while she (or he) may not be to blame for what was done to her, she is definitely responsible for what she does from that moment on.

A similar argument may be expressed here. It’s true that Am Yisrael sinned and had good justifications for their behaviour. But after the fact, the children of Israel had an important lesson to learn. It is useless to understand the root of the problem without acting upon it. That is why Moshe brought it up, as a foreword to Sefer Devarim. They had to know that while not entirely to blame, they still could have done better and there was an urgent need for improvement.

The test of abundance may be even more difficult to pass than the test of scarcity. Perhaps that may explain why Hashem had to ask Moshe a “favour” to take the Egyptians money before they left, as He has promised Avraham (Rashi, Shemot 11:2). The risk of it may not have been worth the benefit of the wealth.

Money is a powerful tool. Some of the greatest spiritual accomplishments could not have been achieved without great amounts of money. Baron Rothschild could have been a fervent Zionist, but he would not have taken such pivotal role in Jewish history had it not been for his charitable donations.

But paraphrasing a fictional character, with great power comes great responsibility. And when this responsibility is neglected, such power turns itself against its holder. This idea is not exclusive to money. Power may come in a variety of presentations: knowledge, grace, strength, charisma, talent, connections, status and so on. None of them are parve. If used for the good, they are great. Otherwise, they pose great danger. Part of the same gold that the Jews used for the Golden Calf was later used for the construction of the Mishkan. Similarly, throughout our lives, we make countless decisions on how to use what Hashem has given us, whether it be wealth or any other means. May we merit that we use them properly. We have seen how the alternative looks like.