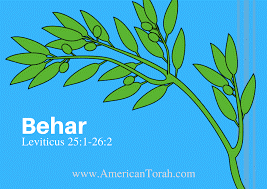 The Torah portion begins with the laws of Shemitah, the Sabbatical year, where the Jewish people are commanded to not plant their fields or tend to them in the seventh year. Every 50th year is the Yovel, the Jubilee year, where agricultural activity is also proscribed.

These two commandments fall into one of the seven categories of evidence that God gave the Torah. If the idea is to give the land a rest, then the logical plan would be to not plant one-seventh of the land each year. To command an agrarian society to completely stop cultivating all farmlands every 7th year, one has to be either God or a meshugenah (crazy). No sane group of editors would include such an “insane” commandment in a set of laws for the Jewish people; only God could command it and ensure the survival of the Jewish people for following it.

Also included in this portion: redeeming land which was sold, to strengthen your fellow Jew when his economic means are faltering, not to lend to your fellow Jew with interest, the laws of indentured servants. The portion ends with the admonition to not make idols, to observe the Shabbat and to revere the Sanctuary.