No announcement available or all announcement expired.
Lag Ba’Omer: What lies behind this enigmatic festival? And why the bonfires? 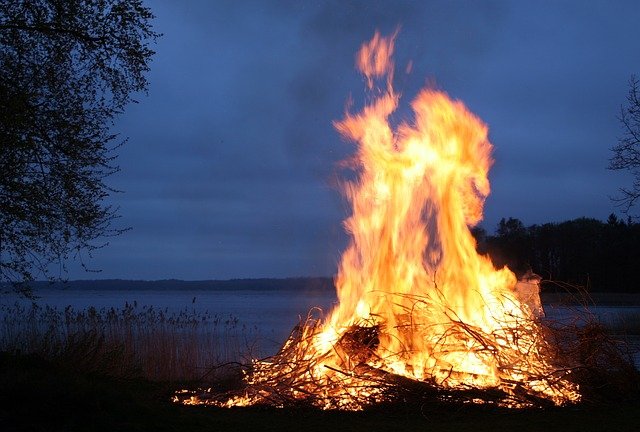 Lag Ba’Omer: What lies behind this enigmatic festival? And why the bonfires?

In Israel, months before the advent of the festival of Lag Ba’Omer — the 33rd day of the Omer, the 49 days that bridge between Passover and Shavuot — one can see youngsters dragging all types of combustibles, from fallen trees to broken chairs to old mattresses. Their destination? The nearest empty lot, where they pile their treasured possessions to impossible heights and wait with eager anticipation until the night of Lag Ba’Omer, arguably their favourite time of year, when they turn the piles into enormous conflagrations. Ask anyone what the bonfires are for, and you’ll be told they are in celebration of Rabbi Shimon bar Yochai, a great sage who lived and taught approximately half a century after the destruction of the second Temple.

What lies behind this rather enigmatic festival of Lag Ba’Omer? What’s so special about the 33rd day of the Omer? And who was Rabbi Shimon, to whose name Lag Ba’Omer is inextricably tied, and why do we celebrate him? And why the bonfires?

The first 33 days of the Omer are observed as a period of mourning. We do not take haircuts, perform weddings, or listen to music. What’s the mourning all about?

Rabbi Akiva, the towering sage of the Mishna, exerted a powerful influence on the Torah scholars of his day, to the point that he had 24,000 disciples. Great as the members of this group was, they had one short-coming: They failed to show proper love and respect for one another. The tragic consequence of this shortcoming was a brief but cataclysmic epidemic that claimed the lives of these students – all 24,000 of them. The period during which the epidemic took place was none other than the first 32 days of the Omer.

To get a better idea of the impact this tragedy had on the Jewish People for posterity, consider the following facts: All of the Torah that we possess and study today, with all of its interpretations, perspectives, dimensions, and applications, is all the Torah of Rabbi Akiva. Although the Oral Torah always existed, each Torah personality who immerses himself in Torah adds his own understanding and flavour to Torah, thus enriching the Torah which will be passed on to the next generation. As we shall see, the Torah we have was transmitted to us by Rabbi Akiva via the five students whom he taught after the loss of his first group of disciples.

The Torah we study today is endless. One can study for a lifetime and not “finish” it. But it is not complete. There are whole areas and dimensions of Torah that are not satisfactorily explored; there is much argument and there are many areas of confusion. All of this might well have been different had we received the full breath of Rabbi Akiva’s Torah, as assimilated and interpreted by 24,000 disciples, along with their unique perspectives and understanding. The demise of the first group of students essentially resulted in our receiving only a fraction of Rabbi Akiva’s Torah. Instead of its full amplification by 24,000 great human beings, we have only the interpretations of five.

We are mourning the lost dimensions of Torah.

It is not so much the lives that were cut short that we mourn; after all, they wouldn’t be alive today even had they lived long lives! It is rather the lost dimensions of Torah, the lost worlds of Torah, that we mourn. We mourn our own lack of ability to connect fully to Torah which was caused by that loss.

It is significant that the death of the first group students was the result of a lack of love and respect amongst themselves. The Oral Torah can only exist on the basis of continuous absorption and incorporation of new perspectives, interpretations, and applications. These new discoveries are unique to those who discover them, but then become the legacy of the entire Jewish people. Torah is only complete when enhanced by each and every Jew. No Jew on his own, no matter how smart, talented or advanced, can reach the totality of Torah. Therefore a prerequisite for connecting fully with the Torah is the ability to appreciate the contribution of another. As the Sages ask, leading into an invaluable teaching “Who is wise?” Their response: “One who learns from every person” (Ethics of the Fathers, 4:1).

The 33rd day of the Omer signified a new period in the life of Rabbi Akiva. The last students of his aborted legacy died, and he established a new venue for his legacy. This consisted of five sages. Their names were Rabbi Meir; Rabbi Yehuda; Rabbi Elazar; Rabbi Nechemiah; and Rabbi Shimon bar Yochai. All of these names are familiar to any student of Mishna or Talmud, but the most prominent among them is the sage Rabbi Shimon, about whom we shall learn more. (There is an opinion that Rabbi Shimon later died on the 33rd of the Omer, and we therefore celebrate his memory on that day.)

If these five new students were able to survive and keep the chain going, there must have been a qualitative difference between them and their fellow disciples of Rabbi Akiva. If the first group failed in their interpersonal relationships, the second were able to rectify that defect. Just as we mourn the dimensions of Torah lost through lack of appreciation for one another, so do we celebrate the reclaimed dimensions that were made possible by devotion to one another.

All of this transpired specifically during the Omer, the period of time leading up to our celebration of the receiving of the Torah at Sinai. This is because preparing for receiving the Torah is all about integration into the Jewish People. God did not give the Torah to me, you or any other individual. He gave it to the Jewish people as a whole. One who cannot put himself within the context of the Jewish people cannot connect to God’s gift of Torah.

So on a deeper level, we mourn that part of ourselves which refuses to recognize the fact that someone else might have something valuable to add to our lives or understanding of Torah. Once we have internalized the depth of the destruction this tendency can cause us, we are ready to begin again with a fresh awareness of the greatness of our peers and acquaintances. We are now ready to celebrate our integration into the totality of the Jewish people and to use that wholeness as background for understanding the Torah.

Additionally, we are ready to celebrate the re-establishment of Rabbi Akiva’s legacy, which is what sustains us in our commitment to Torah study and observance until this day. Rabbi Akiva was destined as the man who would transmit the Torah to posterity. If not for this re-establishment, there would be no Torah.

Significantly, it was Rabbi Shimon, most prominent of Rabbi Akiva’s disciples, who affirmed the immortality of the chain of transmission of the Oral Torah. In a discussion recorded in the Talmud (Shabbat 138b), some sages voiced the opinion that the Torah was destined to be forgotten. Rabbi Shimon said, “God forbid that the Torah shall ever be forgotten!” He buttressed his view with a verse from the Torah, “For it (the Torah) will not be forgotten from the mouth of progeny of the Jews.” (Even today, visitors to Rabbi Shimon’s tomb, nestled among the breath-taking mountains of northern Israel, are greeted by this very verse painted at the entrance to the memorial building.)

As the Talmud relates (Gittin 67a) Rabbi Shimon was the member of the group who most fully internalized the lessons of his great mentor. It was he who revealed the inner depths of the Torah and unlocked the secrets of its innermost dimensions though his teachings. These teachings later served the basis for the Book of the Zohar, the primary work of Kabbalah, or hidden aspects of Torah.

Once, when Rabbi Shimon’s students gathered before him for a lesson, their mentor noticed the good humour which was present amongst them and the absence of any tensions. He then remarked, “It is because you maintain an atmosphere of love and brotherhood that you have merited to be the players in the revelation of Torah secrets.” Through their love and concern for one another they reached a level of unity that gave them enormous power to penetrate the depths of the inner chambers of Torah.

Lag Ba’Omer is a time for reinforcing our unity, specifically in the endeavour of plumbing the depths of Torah, and a time for developing an appreciation that Torah study — and all of Divine service — is a joint effort. The more we learn to appreciate this, the more the wellsprings of the Torah — and our own souls — will open up to us.

Getting back to those bonfires. The book that systematically presents Rabbi Shimon’s teachings is called the Zohar. “Zohar” means “Glow” or “Luminescence.” The book is so named because its teachings illuminate the darkness and confusion of this world and serve as a beacon of light by which to navigate the vicissitudes of life. And Rabbi Shimon himself is referred to by the Zohar as “Botzina Kadisha,” or the “Sacred Lamp.” On Lag Ba’Omer, we honour his memory by lighting candles or bonfires, symbolic of the light provided by the eternal fire of the Torah, particularly its inner dimensions which were revealed by Rabbi Shimon.