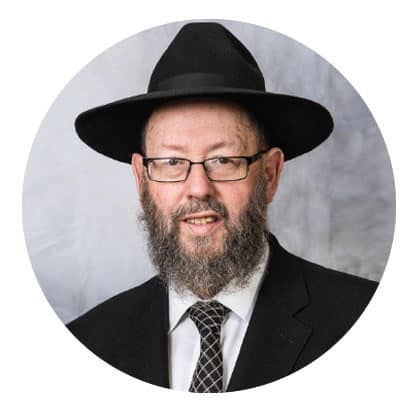 And Yosef said to his brothers, “I am Yosef. Is my father still alive?” And the brothers could not respond to him, for they shrank from him in shame. (Gen. 45:3)

After a sharp confrontation with Yehudah, who pleads with him to have mercy on his aged father, Yosef can longer maintain his masquerade. He bursts into tears and reveals his identity to his brothers. “I am Yosef,” he cries out. “Is my father still alive?” And the brothers “shrink from him in shame.”

What connection is the Midrash making? How does Yosef’s rebuke to his brothers foreshadow the rebuke each of us will face on the final day of reckoning?

Let us consider for a moment. What exactly were Yosef’s words of rebuke? “I am Yosef.” Why are these words considered rebuke?

For 22 years, the brothers lived under the impression that they had acted justly by selling their brother into slavery. They saw their broken-hearted, inconsolable father, but they still thought they were right. They saw that the Shechinah had consequently departed from their home, and still, they were convinced that they had done the right thing.

They suffered through a famine. They went down to Egypt to buy food and found themselves caught in a web of intrigue. They were accused of being spies. Some of them were taken hostage. They were endangered. And now they were falsely accused of robbing the viceroy’s cup. They must have wondered why they were being subjected to such trials and tribulations, but they didn’t have any answers.

And then Yosef declares, “I am Yosef.” And everything is crystal clear! Like a flash of lightning, those words illuminate the landscape of their lives for the previous twenty-two years. Suddenly, they understand everything. All the mysteries are dispelled, and they understand that they have been living a lie for all these years. There could be no stronger rebuke, and they shrink back in shame.

Like a flash of lightning, these three short words will illuminate our lives for us. Suddenly, we will understand everything that has happened to us, and we identify all our mistakes with perfect clarity. And it will be terribly painful. Those three words are all it will take. “I am Hashem!” When we hear those words, woe is to us of the day of judgment, woe is to us on the day of rebuke.

And [Yaakov] saw the wagons Yosef had sent to transport him, and the spirit of their father Yaakov was revived. (Gen. 45:27)

Before Yaakov would allow himself to accept the news that his long-lost son Yosef had been found alive and that he was now the viceroy of Egypt, he wanted to see some solid proof. Perhaps the whole thing was some kind of cruel hoax.

Yosef could easily have sent along all sorts of signs that he was genuine and not an impostor. He could have described his room or any other intimate details that would not be known to a stranger. But he did something altogether different. According to the Midrash, the “wagons Yosef had sent to transport Yaakov to Egypt” were really a hint at the sugya, Talmudic topic, they had discussed in private on the last day they had seen each other – the topic of eglah arufah, the decapitated calf. (The Hebrew word for wagon is agalah, which is reminiscent of the word eglah.) This sign convinced Yaakov that this was not a hoax and revived his spirits.

But why indeed was this such a conclusive proof? Just as an impostor might have somehow learned other intimate details about Yosef, why couldn’t he have discovered this information as well?

During the time of the Vilna Gaon, a very strange incident took place in his city. A young couple had gotten married, and shortly afterward, the husband vanished without a trace. The poor wife was left an agunah, a living widow unable to remarry because her husband might still be alive.

Thirty years passed, and then, one fine day, a man appeared on her doorstep and declared, “My dear wife, I’m back!” Then he told her a long story about what had kept him from returning for so many years.

The woman looked at the man and did not recognize him as her husband. But then again, she couldn’t be sure that he wasn’t. Thirty years wreak changes on a person. They also fade the memory, especially in those times when there were no photographs. The man was about the same build and coloring as her husband. His features were not really dissimilar. His face was weathered by time and the elements, and it was difficult to imagine what he might have looked like thirty years earlier. It was not impossible that this was her husband. And yet, he did not seem familiar.

She expressed her reservations to the man, and he was very understanding.

“Test me,” he said. “Ask me any question about our life together. See if I know the answers.”

So she asked him questions, and he had all the answers. He knew all about their families, their wedding day, their home, including some intimate details that only the two of them could have known.

Still, she remained suspicious, and she decided to seek the advice of the beis din, the Jewish court. The judges of the beis din interrogated the man extensively, but they could not catch him in a mistake. He was very convincing. And yet, his wife was not convinced, which was certainly cause for suspicion. What should they do? They sought the counsel of the Vilna Gaon.

“Take the man to the shul,” said the Gaon. “Ask him to point out his makom kavua, the place where he normally sat.”

They took him to the shul and asked him to point to his seat. The man hemmed and hawed, but he could not do it. Then he broke down and admitted that he had learned all his information from the husband whom he had befriended many years earlier.

The Vilna Gaon had put his finger on the flaw in this man’s diabolical plan. Assuming that the man was an impostor seeking to move in with another man’s wife, he was obviously far from a righteous person. Such a person would seek out all sorts of important details to “prove” his identity, but it would not occur to him to find out about the husband’s seat in shul or any of the other holy matters in Jewish life.

Similarly, Yaakov knew that if the man who claimed to be Yosef was an impostor he might have extracted all sorts of intimate and obscure information from the real Yosef. But he also knew that it would never occur to an impostor to ask which Talmudic topic he and Yaakov were discussing when they last saw each other. When Yosef was able to refer to the topic of eglah arufah, Yaakov was convinced that he had found his long-lost son.

Serious Jews identify themselves by the holy aspects of their lives. The important information is not the make and colour of their cars, not the size of their houses, not the last time they went fishing or played baseball. It is the mitzvot they have performed, the chessed, kindness, they have done, the place where they sit in shul, the last topic they discussed.