Mazeltov to Bernard and Anne Tanner on the birth of a granddaughter and mazeltov to parents Danny and Carla Blumberg.    Condolence on the passing of Abe Maram husband of Rhona Maram, father of Brian, Janine and Lawrence, brother of Morris Maram and Jack Maram.    Mazeltov to Farril and Kelli Rosen on the birth of a daughter and mazeltov to grandparents Hylton and Linda Rosen.    Condolence on the passing of Joyce Levenson mother of Della Lawrence, Steven, David and Lawrence Levinsohn
Do You Own What You Have? 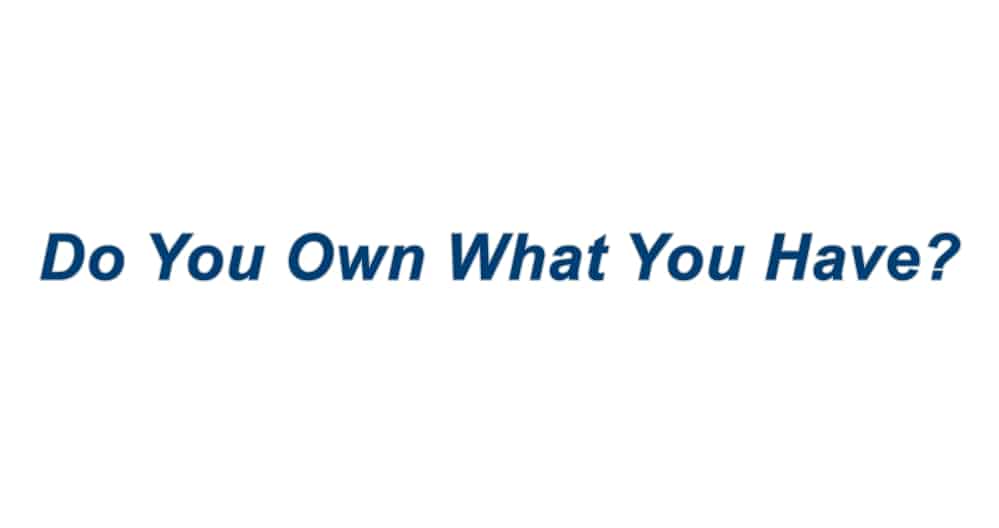 Do You Own What You Have?

I vividly remember the moment I passed my driving test, back when I was a teenager.

It was during a break from yeshivah, I believe over the Passover holiday, and I quickly took the permit test. After successfully getting through that, I dutifully carried out the minimum hours of driver’s training before going to the DMV and taking my official live driving test to get the license. The neighbourhood was quiet and spacious, so suffice it to say that the test was very easy.

In a few minutes, I was officially licensed to operate a vehicle in the State of California.

My mother had driven me to the DMV for the test and was waiting for me in the parking lot. I emerged from the building, giddy with excitement and with a stupid grin on my face. I approached my mother, and she asked, “Nu, did you pass?”

“Yep, I sure did!” I replied with confidence.

“Because you don’t know how to drive!”

It’s a funny anecdote I recall all the time (and laugh about with my mother), both for its quintessential Jewish mother vibes, but more importantly, because it’s truly a valuable life lesson.

In this week’s parshah, we read of a grieving Abraham mourning the death of his wife, Sarah. He searches for a suitable burial site for his soulmate of many years, and settles on the plot of land that would eventually become the famed Cave of the Patriarchs and Matriarchs in the city of Hebron.

The land belonged to a certain individual named Efron the Hittite. Abraham approached Efron and offered a sizable sum of money to purchase the property. Efron, who talked a big game, declared:

In a surprising move, Abraham won’t have any of it and insists on paying retail:

But, if only you would listen to me. I am giving the money for the field; take [it] from me, and I will bury my dead there.

Efron quickly turns out to be like the rest of them, and gleefully responds, “Great! Between me and you, what’s 400 shekel?”—an astronomical amount of money in those days. But Abraham doesn’t flinch, and hands over the money.

The rest is history. You can even visit the cave today.

It’s very puzzling: if Efron offered to give it to him, why did Abraham insist on paying full price? Even if you argue that Abraham didn’t want a handout, why did he have to go to the opposite extreme and insist on giving so much money? A nominal sum could have sufficed.

Abraham appreciated a simple yet sometimes difficult truth: if you want to make something truly yours, you must pay for it. Full price.

This land belonged to Efron. It was Hittite property, and emphatically not part of the Abrahamic family. Abraham wanted to bury his wife, his partner with whom he had founded and promoted a glorious and revolutionary way of life. To be a fitting and honorable host to such a legacy, this eternal monument needed to bear the majestic stamp of those interred inside without traces of anything or anyone else.

So Abraham paid the premium. He knew that if he accepted the gift, it would never truly and wholly be the legacy and heritage of the Jewish people. In some small way, there would still be a figurative plaque on the west wall stating, “Donated by Efron the Hittite.” And that would not do for his wife and the movement to G‑d they had initiated.

“No donor plaques in my burial hall!” Abraham resolved. And so, he opened his purse and bought the plot at a premium, no questions asked. It was now his and the Jewish people’s forever.

And so it is in life. If you want to really own something, you must pay for it.

Payment isn’t always in cash. Like my mother taught me then, payment also means hard work, investment, and time. Don’t think you can sail into the DMV after driving with your older cousin for two hours and expect to be a “driver.” That I got away with it when I was younger was a missed opportunity; had I failed, I certainly would have been compelled to actually learn how to drive, and that would have ultimately made me “own” my driving skills so much more (spoiler: I think I’ve got it by now).

It’s like that with so many things. Certain people are naturally gifted with a generous amount of smarts; they coast through school without breaking a sweat. They ace their tests, get good report cards, and don’t even really bother listening in class.

Are they better off? Have they positioned themselves better in life? I wager not, for they have not “earned” or “owned” their progress, at least not in the fullest sense of the word. Too much of what they’ve achieved bears the mark of “someone else”; it may not be Efron, but it’s certainly not them. To own it and proudly fly that flag requires plain old hard work.

Think about it this way: Are you naturally good at something? If yes, here’s the real question: are you challenging yourself in that area? Or are you being lazy and letting yourself get away with what’s convenient because you know you’re good at it and whatever you spit out will be “good enough”?

If you’re a naturally gifted writer, ask yourself, “When was the last time I really challenged myself to write something extraordinary?” If you’re a born artist who can paint in her sleep, challenge yourself to paint something you’ve never tried before, to work hard, tear it up, and then try again. If you’re a great speaker, don’t just pull out a TED talk you have on file; sweat a little and come up with something new!

Be like Abraham, and pay retail. Trust me, it’s the Jewish thing to do.