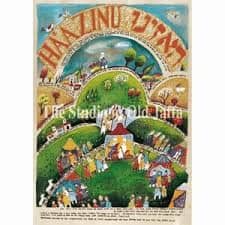 The Torah portion is a song, a poem taught to the Jewish people by Moshe. It recounts the trials and tribulations of the Jewish people during the 40 years in the desert. Jewish consciousness, until the present generation, was to teach every Jewish child to memorize Ha’azinu. In this manner we internalized the lessons of our history, especially the futility of rebelling against the Almighty.