No announcement available or all announcement expired.
Devarim 5781: Peace not Pieces by Rabbi Yitzchak Zweig 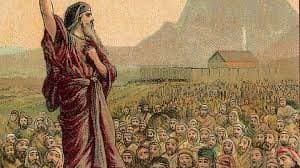 GOOD MORNING! As we have previously discussed, Tisha B’Av is the saddest day on the Jewish calendar. Tisha B’Av – the ninth day of the Hebrew month of Av – culminates the foreboding time period that our sages inform us has been a portent for evil and terrible events throughout Jewish history.

Over the last 3,500 years, many of the most horrific events in Jewish history occurred on the ninth of Av. Rabbi Kalman Packouz, of blessed memory, compiled the following list to recount some of the many tragedies of this day:

This year, Tisha B’Av begins on Saturday night, July 17th. Tisha B’Av is a fast day (like Yom Kippur, from sunset one evening until the stars come out the next evening) and culminates a three-week mourning period by the Jewish people. On this day, one is forbidden to eat or drink, bathe, use moisturizing creams or oils, wear leather shoes, or have marital relations. The idea is to minimize pleasure and to let the body feel the distress the soul should feel over these tragedies.

Like all fast days, the objective is introspection; disconnecting from our physical distractions and taking a spiritual accounting and correcting our ways. In Hebrew this is called teshuva – returning to the path of good and righteousness, to the ways of the Torah.

Tisha B’Av is a very somber time; at night the lights in the synagogue are dimmed (many synagogues distribute candles to those in attendance) and everyone sits on low stools or on the floor, similar to mourners in a shiva house (house in mourning). The book of Lamentations, which was authored by the prophet Jeremiah who witnessed the destruction of the First Temple and the subsequent exile of his people, is read in a hushed and mournful tone.

The service is followed by a communal reading of some of the elegies composed by poets over the last two millennia. Many of those in attendance read these sad passages with tears streaming down their faces. This is repeated the following day; the custom is to read these elegies until midday and then head home to rest before returning for the afternoon services.

A story is told of Napoleon walking through the streets of Paris one Tish B’Av. As he passed a synagogue, he heard the mournful sounds emanating from within. Napoleon turned to one of his attending officers and asked, “What’s this all about?”

It was explained that the Jews were in mourning over the loss of their Temple. “Why haven’t I heard about their Temple being destroyed?” The aide replied that it had happened nearly 1700 years prior. Napoleon is reputed to have observed, “A nation that has mourned its Temple for 1700 years will surely merit seeing it being rebuilt one day.”

In all likelihood the previous story, like many tales and legends about famous personalities, never happened. But as author Tim O’Brien once noted, “Just because something never happened doesn’t mean it isn’t true.” In other words, the Jewish people, who for two millennia have been mourning the loss of the Temple and actively praying and pining for it to be rebuilt, will surely one day succeed in making that dream a reality.

Still, in order to merit having the Temple rebuilt we must first understand why it was lost in the first place and make every effort to correct whatever caused that to happen.

The Talmud (Yoma 9b) states that the Second Temple was destroyed because of the sin of “sinas chinam – baseless hatred,” which was an outgrowth of the rampant strife and discord that plagued the Jewish people. This disharmony led to both the destruction of the Temple and the two millennia long exile of the Jewish people from the Land of Israel.

Once again, I would like to share an insight from my brilliant father, Harav Yochanan Moshe Zweig Shlita, based on a class he delivered titled “Peace – We Complete Each Other.” If interested, you can download the entire class from my podcast page on Apple, search “Torah Life and Living,” or click here to listen.

My father points out that the greeting “shalom” that is used as both hello and goodbye in conversational Hebrew actually means neither – the literal translation is “peace.” This seems to be a rather odd way to greet someone. What is the meaning behind this salutation?

Much of the ancient wisdom of the Torah has been distilled into principles of life and ethical behavior and compiled by our sages in the work known as “Pirkei Avot – Ethics of our Fathers.” This manual for living a meaningful and principled life was completed about two thousand years ago and the wisdom contained within is quite timeless. Pirkei Avot is part of the Torah known as mishna – which forms much of the basis of the “oral law.”

We find an interesting teaching in the fourth chapter of Pirkei Avot; “Rabbi Masya ben Charash said, ‘(when meeting others) be the first to initiate a greeting, and be the tail to lions and not the head of foxes.’” This statement seems very odd as the two concepts seem to be unrelated and distinct.

This is even more perplexing when considering that the primary method of teaching the “oral law” was, as the name implies, verbally. A non sequitur would be infinitely harder to remember and transmit properly. What is the relationship between these two concepts?

Strife is always painful; when something is torn apart there is bound to be some level of profound suffering. This is why the word for peace in Hebrew is shalom. The word shalom come from the Hebrew word “shalem – whole.” When we have unity we have peace.

When we greet someone with “shalom” what we are really conveying is that we are unified with one another (as in “you complete me”). This is the ultimate way to greet or depart from someone because it implies a deep rooted connection and commonality as well as a sustained interest in their wellbeing.

This also explains the relationship between Rabbi Masya’s two statements. When we internalize that being part of a unified whole is the goal (rather than a focus on personal achievement) then we begin to understand that it doesn’t really make a difference whether or not we are a head or a tail, we are all one.

It’s not about the role you play; it’s about being part of a higher caliber entity. Therefore, it is preferable to be the tail of a lion than the head of a fox because, at the end of the day, it’s not about you – it’s about the unity of the corporate entity.

The Torah describes the Holy Temple as the place where the Almighty “rests His name;” it is where the Divine Presence is manifested in this world. When the Jewish people suffer from disunity and conflict, when they are unable to resolve their differences with each other, they make it impossible for God to rest His Presence in their midst.

Thus, in order for the Holy Temple to be rebuilt we must actively work on ourselves to internalize that there is no “us vs. them” – our fates are all intertwined and we must make every effort to bridge any divide between us. We are all created in the image of God and we are all His children. There is no greater joy for a parent than seeing one’s children getting along, helping one another, and living harmoniously.

May the Almighty grant all of us the insight and wisdom to become unified so that we will merit seeing the Holy Temple rebuilt speedily in our days. Amen.